Kareene & The Soon Be Christmas Band

The project started as a melody created at a workshop with the residents back in October. The words were written around the theme of Christmas and homelessness, and a rough demo was recorded at YMCA Surbiton Music studio. The song was then re-written, refined, developed, vocals recorded, produced, mixed and mastered at private studios in Chessington.

The majority of the performers, writers and band members involved in this project are currently homeless and are living in the temporary hostel accommodation at YMCA Surbiton.  The song is on iTunes, available to download, so please support the YMCA and the residents who contributed to this work as funds raised will go directly to helping to improve their lives.

“We gave residents of YMCA Surbiton the opportunity to be creative and now we have a potential hit Christmas song! This could change lives of the residents enabling them to secure a brighter future, or launch their music career – they are talented and just need a chance. It looks like we could have our very own Band Aid YMCA Christmas song!” says Karina Angela Thomas, the songwriter who also works for YMCA Surbiton’s Community Activities Team.

The song has been released in to the UK and Ireland charts, so hopefully it will do well.

Profits from the download sales will be donated to the YMCA (specifically YMCA St Paul’s Group) and to YMCA residents who contributed to this work and to the (non-resident) performers/writers/producers of this work. 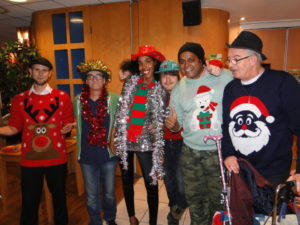 Mixed and Mastered by Mike Cliffe