The Virgin Money London Marathon takes place on Sunday 28 April 2019 and YMCA St Paul’s Group is especially fortunate to have two people running to raise money for us. One of the runners is James Agar who is a member of our Audit & Risk Committee and who works for Centrica. The other is our Financial Accountant Peter Okeng, who works at our corporate office in Surbiton. They are both passionate about running and are keen to raise money for YMCA St Paul’s Group by running in the London Marathon, to help support the work we do in our communities.

Running in the London Marathon

A Teddington local and our Financial Accountant at YMCA St Paul’s Group, Peter is running his first London marathon. “I first ran in the Kingston half marathon in 2016 and again in October 2018, that made me want to do it.”

He wouldn’t describe himself as an elite runner or a novice, but somewhere in between as he usually runs 15k every week, and has done so for the last few years. “I’ve only been running for about 3 or 4 years. I was beginning to get sluggish and I wanted to get fit. I’m not really a sporty person, but I just wanted to be more energetic and fit. It was really hard at the start.”

Running is a way to relax for Peter, and he describes it as “me time”. “Running around on my own helps me to think through things. To be alone with myself and my thoughts. As I run, I listen to motivational podcasts on Youtube and Christian music, which I find inspirational.”

Peter’s usual run is through Twickenham, Richmond, Hanworth, Hampton Hill around Bushy park, Hampton Court and Hampton Wick. “It’s my favourite route because at a couple of points there is a steep rise, so it’s challenging. I really push myself.”

Peter is a confident runner and he’s excited about running the London marathon. “When I was training for the Kingston half marathon this year, 5 weeks before I actually ran more than the distance of the race on four occasions, so I am pretty confident I can do the distance of a full marathon.”

In terms of training, Peter hasn’t started a structured programme yet, but he’s intending to join a running club and also run the Hampton Court half marathon in February. Running in poor weather doesn’t bother Peter, in fact the opposite. “I run in all weathers. And the funny thing is I love running in bad weather. It helps develop my mental muscles, doing something I don’t want to do. It’s more of a mental challenge for me than a physical challenge.”

To support Peter, please donate generously to help him reach his target of raising £5,000.

This is James’ first London marathon. He has run 10k races and half marathons in the past, but this special marathon is one he has always wanted to do. “I decided this year was the time I was going to do it!” says James. “I’ve been training for about six weeks.”

James is completing two 5k runs during the week, followed by a 10k run at the weekend. He generally runs by himself and has entered into a few events to set himself goals as the big day approaches. “I recently ran the 11.4km Hogsback Road Race near Guildford – that had a few hills in it and I was not ready for those! It was painful but I enjoyed it.”

James’ favourite run is along the river from Weybridge where he lives to Walton. It’s picturesque and fairly flat and he always has music to keep him going. “I have a specific running playlist. It’s 150-165 beats per minute to help me keep the pace.”

As the training ramps up, so do the concerns about running such a big race. “My main worry is running out of energy and hitting the Wall!” says James. “I’ve never done a sporting event that lasts that long. I used to do a lot of swimming, and the longest I ever swam was just under 3 hours, so this will be going beyond that. I just imagine that the day itself will be an incredible experience – and the following day I won’t be able to walk.”

To support James, please donate generously to help him reach his target of raising £2,000. 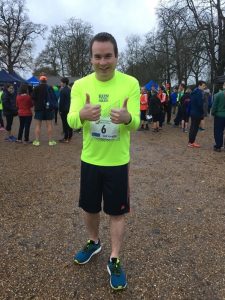