YMCA Walthamstow’s Rough Sleeper Project provides short-term accommodation for three months to help rough sleepers get off the streets. The project is funded through the Government’s new Rough Sleeper Initiative.

At YMCA Walthamstow, there are 15 rooms for rough sleepers, along with their dogs. “Our bedsits are dog friendly and the Dogs’ Trust has kindly partnered with us to provide leads, dogs, bowls, beds and toys, to ensure the dogs have what they need while they are with us. We have also registered with the Hope Project which is the Dogs’ Trust’s veterinary entitlement card scheme. This scheme funds veterinary treatment for dogs whose owners are homeless or in housing crisis,” says Heather Barrow, Area Housing Manager.”

Caroline, 50, is living in the Rough Sleeper Project with her partner Kevin, 40 and her dog Juke. “I got Juke when he was two years old, he was vicious and difficult to handle because someone had tried to get him ready as a fighting dog but I’ve put a lot of work in with him and he’s great now. I’ve had him 12 years and I wouldn’t give him up for nobody.

“This place here at YMCA is the first place we’ve stayed in a long time. It’s the only place that would take Juke. It’s amazing. Juke has seen a street vet, as he’s getting old with arthritis and a cyst. I don’t want him to have the cyst removed though in case he doesn’t wake up again. It doesn’t bother him.

“I’ve been living on the street for the last two and a half years, locally around here in Walthamstow. People know Juke, everyone knows him. Being here at YMCA, he loves it – he doesn’t want to come outside sometimes.

“I’m living here with my partner Kevin, and we both have a room each. It’s brilliant – and it’s really helped me get back on my feet. I’ve now got a doctor to help me with my deep vein thrombosis. I’ve also got depression and I’m on antidepressants. But I feel completely different now, it’s a lot better. I was drinking a lot, and I’ve cut down on that. It’s just so nice having somewhere you can stay.

“Before I was rough sleeping, I was living in accommodation with a partner, but we split up and I got evicted, which is why I ended up homeless. I was living in a tent and people would kick it down and rip it up. People just don’t think when they do things.

“Hopefully I’ll get somewhere to live soon and me, Kevin and Juke can move on.” 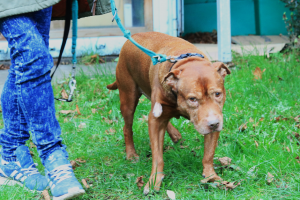