The Merton Night Shelter has been running for eight years now at faith venues across Merton borough, serving homeless people over the coldest months. Run as a partner project of the  YMCA St Paul’s Group, it’s supported by the Wimbledon Foundation and Merton Council.

YMCA Project Coordinator Nicki Zisman allocates 14 places at the Merton Night Shelter to people who are either referred by partner agencies or who have self-referred. Many people are referred via the Merton Faith in Action Homeless Project. Valerie (main picture) is the only female guest at the shelter and has her own private space allocated. She is Hungarian and speaks little English, so YMCA staff communicate with her via Google translate.

Beds are set up at the Merton Night Shelter venues where the guests are also provided with a hot dinner, and depending on the venue, a shower too. Set-ups vary from venue to venue, depending on space. “We have 14 different faith venues hosting which include churches, the synagogue and the mosque, with the Hindu temple providing the food at one of the churches. We will host approximately 35 people over any winter season,” says Nicki.

“Our core purpose is to offer respite over the coldest winter months, but we try to help people  move into accommodation. We register everyone with a GP and try to support with what ever issues are guests need help with.

“Key to the operation are the fantastic volunteers who work on a rota basis to provide a hot evening meal, a safe, warm place to sleep and breakfast each day of the shelter run. The shelter team work with each shelter guest to help them achieve their best possible outcomes”.

“This is my seventh year of volunteering. I look after the donated clothes, sorting and arranging them and kitting the guys out. I like to make sure they go away looking the best they can. I love volunteering here. The night shelter is a brilliant example to everyone of how you can work as a community to get people back on their feet. I’m so glad to be part of it.” 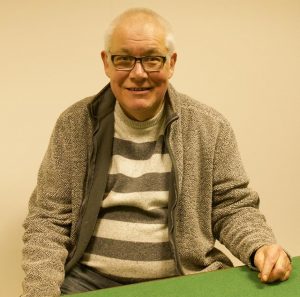 “I lost my job and my home as a chef. It was quite a shock. I had been working since I was 16 so to find myself out of work and living on the streets was very difficult. I just didn’t know who to talk to or where to turn to, to find shelter. Merton Council refused to help me and in the end I went to the police station to try and find help. They suggested I went to the YMCA, who put me in touch with Merton Night Shelter. Luckily for me a space came up for me at the last minute.

“I can’t praise the night shelter enough. All that mattered to me was that I wasn’t going to be sleeping outside – I did it 3 times and couldn’t believe a human body could get that cold.

The first night I knew I would be sleeping rough I went to the Alexander Pub in Wimbledon as there is a covered alleyway. I stayed there and it was safe. The Alex staff were kind and told me that the alleyway heaters were still on and staff gave me a coffee in the morning.

“The staff here are local heroes, they work so hard. They are just so friendly – my biggest fear was that people would sneer at me. It gave me faith in humanity again to come here.

“Once of the nice things about the Winter Night Shelter is that it’s multi-faith, I think that’s lovely. My next big thing is to find work. Getting signed into the job centre took me five weeks and four interviews. But there’s no point getting angry with the staff, it’s just the system. It helps that I’m quite placid.” 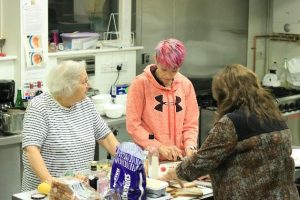 Volunteers prep the food in the kitchen 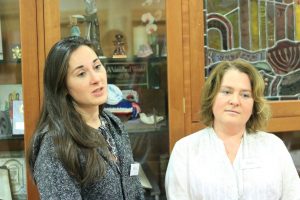 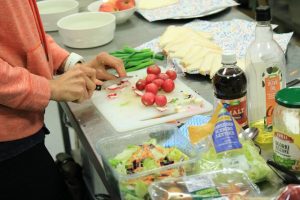